skip to main | skip to sidebar

Ironic, in an Alanis Morisette Kind of Way

So, I was just introduced to this video after mailing all of my maternity clothes to Carolina in Alabama.

Um, Carolina?  I'm going to need those clothes back, and if anyone knows where I can find some black market Clomid I'd really apprecite that information.
Posted by Christina at 8:43 PM 3 comments:

Two movies, both alike in dignity, in fair California where we lay our scene.

O.K.  I'll stop that now.  But, seriously, which of these two ostensibly heterosexually macho movies is the most homoerotic you've ever seen?

Yes, it was worth posting twice.
or,
2.  1986's Top Gun, which, in addition to featuring a sweaty, shirtless beach volleyball scene, includes this little gem in which [Trouser] Viper, played by my real mom's pretend boyfriend Tom Skerritt, offers sage advice to a whitey-tightied Maverick in the men's room.  You know, how and where your mentors best coach you. One a penny, two a penny...
So, which is it, Peeps?  If Pat Robertson were to settle in for a fine Saturday afternoon of cinema on TNT, which would he be more likely to preach against on Sunday morning?﻿
﻿
Posted by Christina at 9:00 AM 2 comments:

Head to Head: This Is Why We Fight

I have a love/hate relationship with The Decemberists.  Go on.  Ask them.  They'll totally agree.  Currently, with the release of their countrified and folky The King is Dead we are back on solid loving ground.  But, being in a love/love relationship with Regina Spektor, I can't help but hear a mashup between The Decemberist's "This Is Why We Fight" and Spektor's "One More Time With Feeling," which also prominently features "this is why we fight" in the lyrics.  It's like a mobius mashup; I listen to one, then immediately listen to the other, which makes me crave the first one all over again.

So, here.  You listen and decide who made better use of the line, because I can't.  They both make me so happy.  Smack my ass and call me Sophie, but I just can't choose.

Posted by Christina at 12:33 PM No comments:

It's Come To This

Livy is at Oma's.  SLB is at work.  And I'm seeing if I can embed this gif into my blog.

As we've been slowly shifting the chaos of our new home into order and comfort we've been escaping the pressure of the mess by spending time with our buddies.  Last week we had a big adventure at the Pacific Science Center with some friends from our newborn PEPS group.  We met up with Sandy and Gavyn (Hayndy and Gammin) and Katie and Liam (Tatie and Umum), our old buddies (BUDDIES!) from when the kids were about 2 months old. 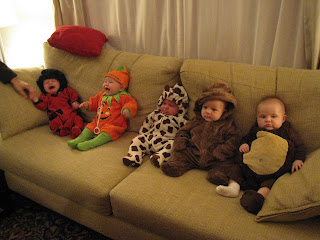 Halloween 2009: Gavyn is the cranky cow, Liam the wise bear, and Livy the chunky one-footed headless monkey (along with Willa the grouchy ladybug and Clara the gleeful pumpkin). 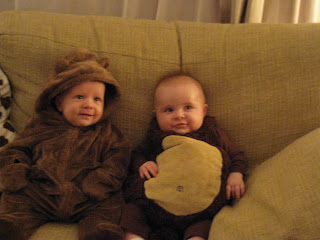 Liam and Livy yuk it up. 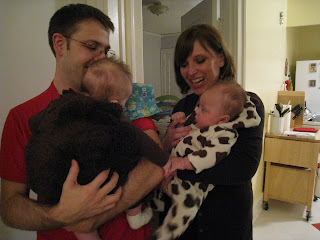 Livy and Gavyn holding baby hands.
It's been wonderful watching our kids grow up together and watching each other grow up with our kids.  It's almost impossible to believe that they were once little lumps of babyness now that they're all full-fledged toddlers.  When I first had Livy I'd inwardly roll my eyes when more experienced mothers talked wistfully about their children's infancy being gone in a flash.  Now I'm on the other side of that equation and, sigh, where did our babies go?

Apparently they've gone to the big water table at the Science Center, 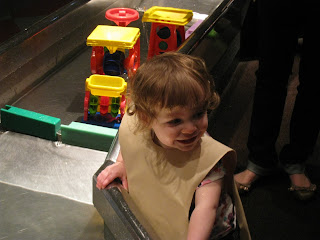 Livy was soaked.  Gavyn was EXTRA soaked.  Liam miraculously ended the day dry.
off to control the water-squirty thingie with the serious intensity it deserves and requires,﻿ 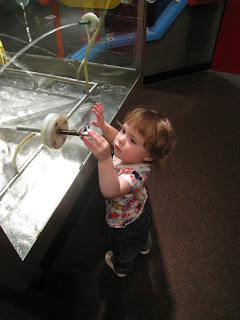 With great power comes great responsibility.
and into a big, fake helicopter to push buttons with even more focus and intensity.﻿ 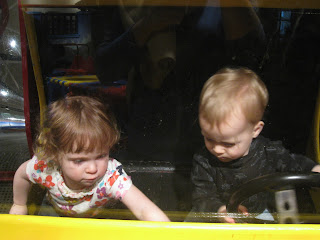 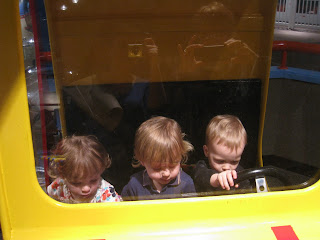 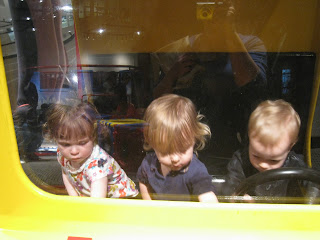 Serious business.
They're such good lifelong friends that even this crime of passion was eventually forgiven.  Remember, you always hurt [most] the ones you love [most].
Only one child was harmed in the making of this film.
Katie later told me that Liam woke up during the night after this accident crying "Neenee!  Vivy!  Owie!," but that didn't stop him from loving us again this week when we 6 met up at the zoo for more good times.  Because that's how it is with friends who've become family - you can hurt each other, then laugh together, and sometimes fly helicopters together and love each other through it all.﻿
Posted by Christina at 12:30 PM 1 comment:

Because it's time for Livy's snacks and diapers to go biz-cazh.* 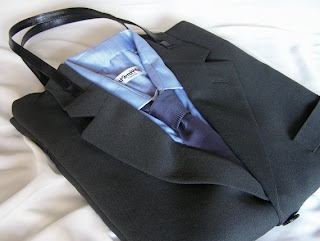 Every girl's crazy 'bout a sharp dressed diaper bag.
Get yours here (and check out the sexy velvet version for when you take your baby clubbing).
*Douchebag for "business casual."﻿
Posted by Christina at 4:21 PM 1 comment:

Because Only Old-timey Villains Wax Their Moustachios

Today while pillaging the library Livy turned a corner and found this book on display for Women's History [Ghettoization] Month. 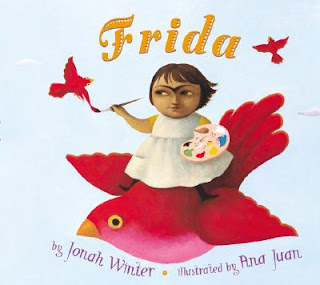 Even as an infant she had a unibrow?  Um.  O.K.
To celebrate her excellent taste in literature and art we checked out the book, the first I've ever borrowed on her behalf.  And to let you all share in our festivities I give you this, one of the best Halloween/Day of the Dead costumes I've ever created. 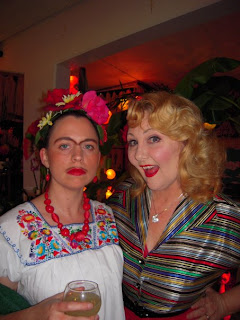 It's a natural look for me.
That's my friend Trixie Lane of Seattle Retro Photography, who would have taken my maternity pictures had I had any maternity pictures taken.  She's awesome, and no, kittens, she's not in costume.  She's just that fabulous every dang day.  You're right to be dazzled by her brilliance.
So viva Trixie!  Viva Livy!  Viva Frida!  What a colorless and bland world we'd live in without having been brightened by three such awesome women.
Posted by Christina at 1:08 PM 1 comment:

Hi, friends!  Long time no write to!  We're settling in at the new house, but here's the last video I took at the old house.  I miss that bright little kitchen already.  Thank goodness we packed the bright little girl with us.  This isn't particularly riveting film, but stick around until the end when it gets unexpectedly hilarious.

Posted by Christina at 7:05 AM No comments:

The Me Show: Starring Me, Featuring Others.

Other Blogs I Like, But Not As Much As Mine